Let’s face it: North Park is a bit of an underdog when it comes to the neighbourhoods of Victoria. It’s not gentrified Fairfield or trendy Fernwood. Hell, sandwiched between downtown and Fernwood, North Park is simply a place to pass through for many people.

But this plucky inner-city quadrant is on the up and up. North Park is getting a face-lift with a new slogan (“edgy to the core”) and an eclectic collection of independent businesses setting up shop in the hood. Yes, it’s still home to things like a methadone clinic and a recovery house, but it’s indicative of North Park’s character that residents and businesses seem to embrace these things, rather than shun them.

Bound by Blanshard, Cook, Bay and Pandora streets, North Park covers about one square kilometre of turf and is home to about 3,000 people within 18 blocks. 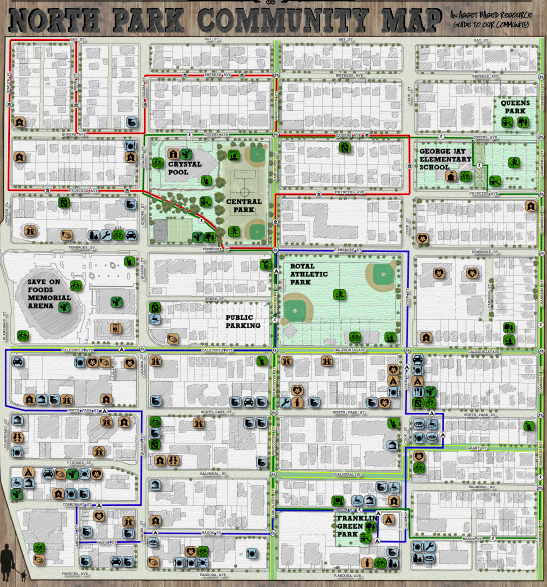 The neighbourhood gets its lively energy in part from its young population — a recent City of Victoria map points to North Park as having the highest proportion of single people in the city at 70 per cent.

So it’s not entirely surprising that North Park is home to everything from an artisan ice cream shop to a bagel factory to a killer mid-century modern furniture store.

Whenever I have out-of-town guests I find myself recommending they make at least one stop in this often-overlooked part of the city. Here are my Top 10 go-to spots in this funky hood … 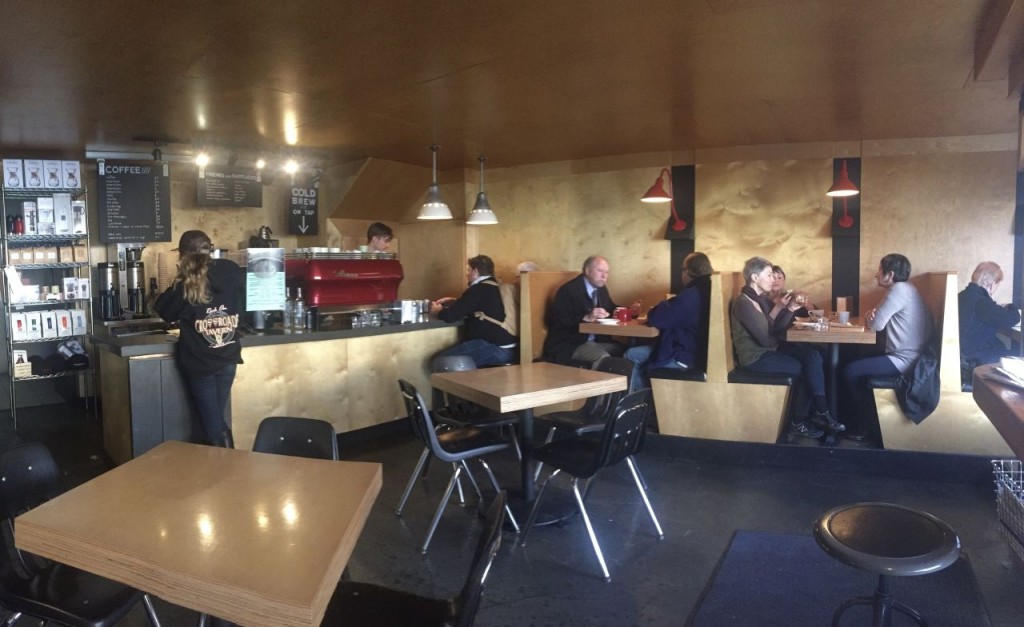 Recently I ran into a group of fellas who’ve been having breakfast at The Parsonage (1115 North Park St.) every day for 18 years. You know what that means? The breakfast is damn good.

Customers routinely line up out the door to get their hands on one of The Parsonage’s famous breakfast bagels, featuring carbs from Mount Royal Bagel Factory next door (another go-to spot) filled with your choice of Slater’s bacon, free-range egg, cheddar, spinach and grilled tomato.

No matter how busy it is, the service at The Parsonage is consistently super friendly so I can’t help but keep going back. 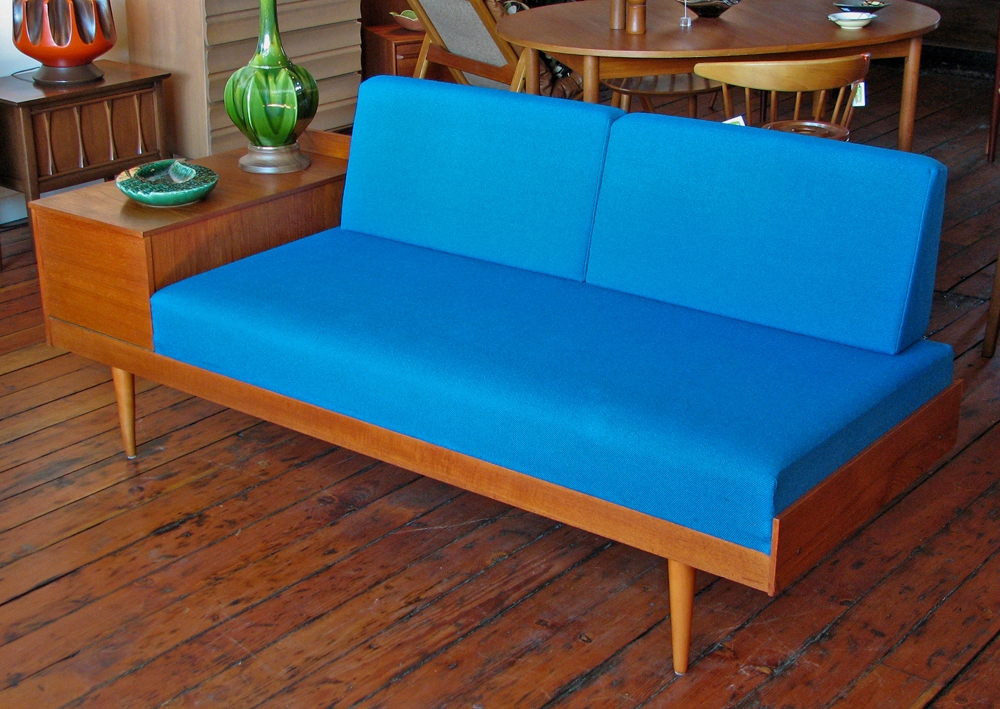 If you’re in the market for mid-century modern furniture and accessories, Easy Livin’ (1046 Mason St.) is pure gold.

Cheryl Easton and Jim Kostyniuk escaped from the hustle-bustle of Vancouver (and their jobs as an event planner and urban planner) and followed their passion for lovingly restoring mid-century modern furniture five years ago.

I’ve been scouting finds there ever since and have always found the collection to be carefully curated and reasonably priced. Bonus: Cheryl and Jim are super knowledgeable and friendly.

I’d never have expected to find a great massage studio in this out-of-the-way block of Fisgard Street, but I was hooked on Calm (835 Fisgard St.) after my first visit.

The serene space strikes just the right balance between the pricier spa experience and the more bare-bones clinical massage setting. An initial 60-minute appointment with a registered massage therapist will set you back $115, but subsequent visits are a very reasonable $95. Plus, in my experience, all of the masseuses are magicians. 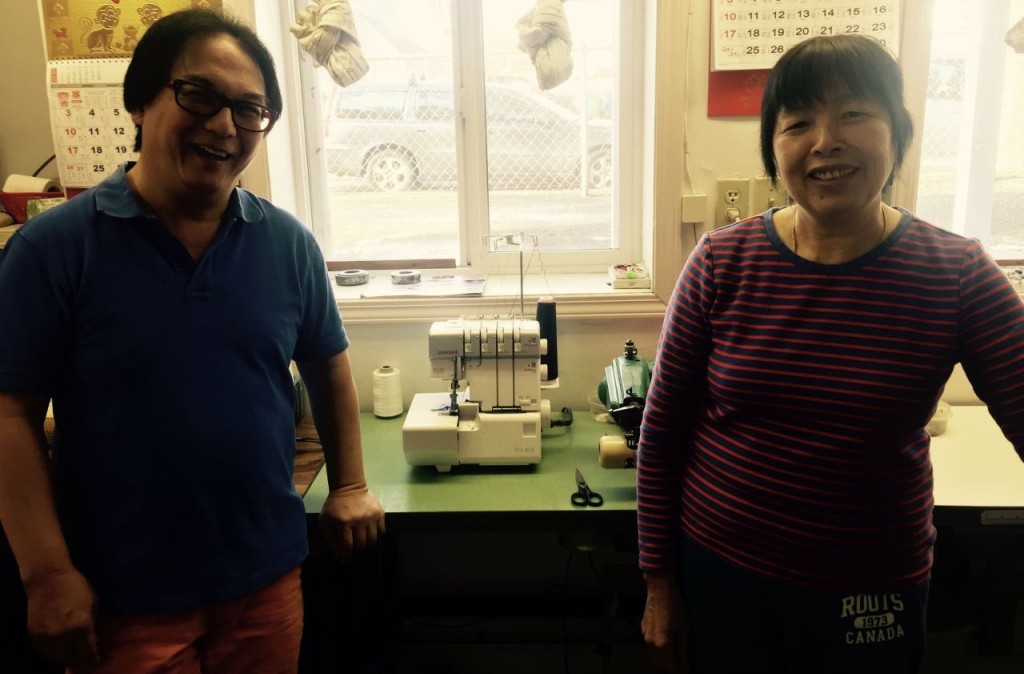 I can’t quite pinpoint the moment I heard about Gar Fong (1002 North Park St.), but I’m pretty sure it was in a hushed whisper from a colleague. Hemming for $6? It seemed too good to be true.

The first time I pranced out of this basement apartment on the corner of North Park and Vancouver St., I felt like I’d just been accepted into a secret society (a utopian society where clothing can be mended in a jiffy for an eminently reasonable price).

Fong worked in a factory in China before immigrating to Canada in 1990 and opening the doors at her current North Park location in 1998. Her brother-in-law Jim Eng does the talking, while Fong does the sewing. You’ll be ushered into a closet (yes, actually a closet) to try things on if need be. The service is quick, friendly and I guarantee you’ll leave with a smile on your face. Open Tuesdays, Thursdays and Saturdays. 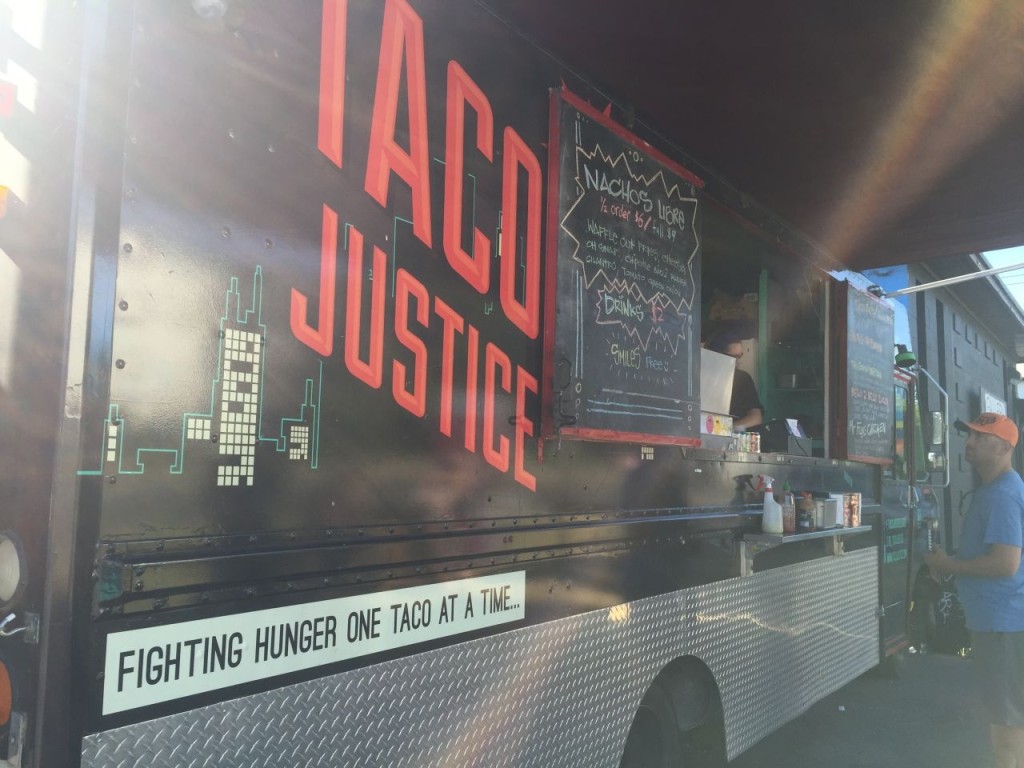 When the Taco Justice truck isn’t roaming around the province to music festivals, it’s stationed beside Wellburn’s Market, at the corner of Cook and Pandora Streets, where it’s “fighting hunger one taco at a time.”

My personal favourite is the Brutus the Barber, which consists of spiced island beef, cheddar crisp, charred salsa, chipotle aioli and watercress veg. But I’m told the most popular offerings are The Green Bastard, which involves panko-crusted avocado wedges, and the Belly-to-Belly Suplex, featuring slow-cooked pork belly.

Taco Justice is taking a break until April 1st so hang tight. 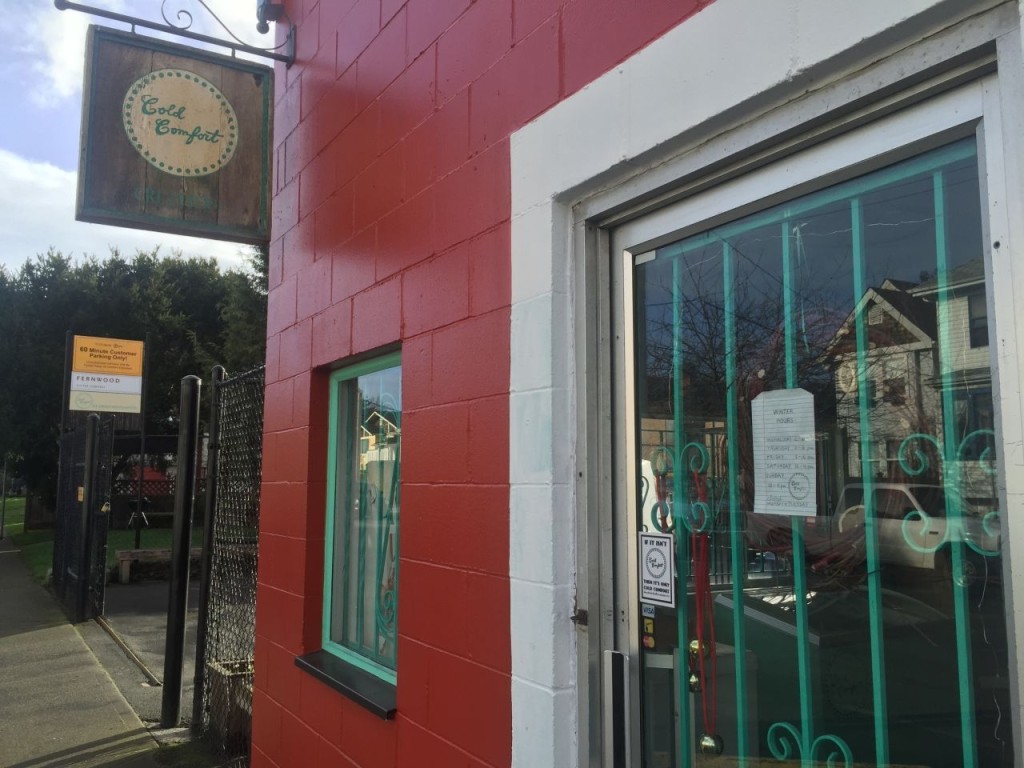 I can recall first seeing Cold Comfort’s cute little white van serving up handcrafted ice cream delights at the Fairfield Market back around 2010, when I first moved to Victoria. Now the little ice cream-van-that-could has its very own storefront right next to The Parsonage (at 1115 North Park St.).

Owner Autumn Maxwell got into the ice cream business by accident after beginning to make her delicious creations for friends and family and it all getting a bit out of control. 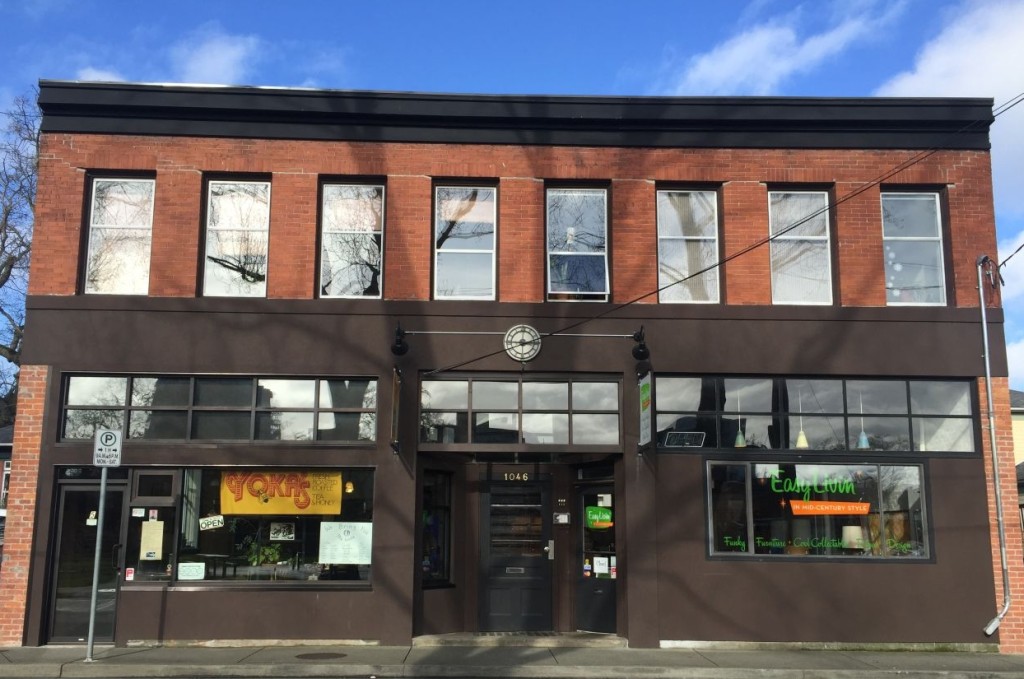 Located in the same building as Easy Livin, Yoka’s Coffee, Tea & Honey offers more than 20 varieties of coffee — all roasted on site in a mid-1930s roaster. That makes for one of the widest selections of certified organic and fair-traded coffees in the city. Yoka’s also sells B.C. honey (late fall until the end of spring) and a variety of bulk spices.

Founder Yoka Van Den Berg started the business in Vancouver in 1983, but after 27 years wanted something a little bit quieter, so moved to Victoria in 2010.

Fun fact: The folks at Yoka’s and the folks at Easy Livin’ actually knew each other in Vancouver (Jim’s office was above Yoka’s coffee shop) and it was a coincidence that they ended up setting up shop in the same building in North Park. #SmallWorld 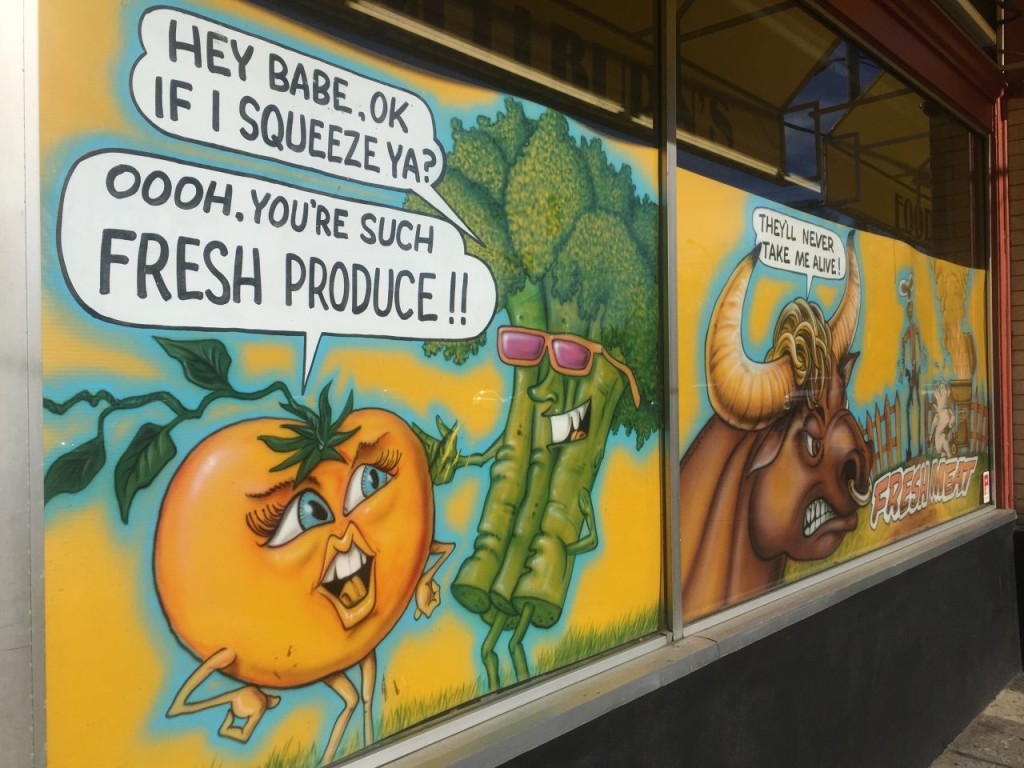 Everyone I spoke to about this article was emphatic that Wellburn’s Market be included in this list — and with cartoons like this on the side of their building, how could Wellburn’s be forgotten?

This iconic grocery store has been operating since 1914 and has been run by the Lum family for 33 years. Entering Wellburn’s is like a blast from the past, with aisles named after Victoria streets and a stable of regular cashiers that seem to know everyone by name.

While it might not look like much from the outside, Wellburn’s offers some of the lowest prices in town, has an in-house bakery and offers a surprisingly good produce section. Plus, shopping there is always an adventure in people-watching.

The recently re-located Shatterbox Coffee Bar (916 Pandora St.) is a great new addition to North Park between Blanshard and Quadra Streets. It’s south-facing, so there are a couple stellar sunny spots out front to do some of the aforementioned top-notch North Park people watching. Or snag a comfy window seat inside and curl up with a good book.

Owner Kalen Harris knows most of his customers by name and is focused on creating superb coffee blends, as opposed to the single-origin focus of many other coffee houses. For the tea drinkers out there, Shatterbox also does a killer London Fog (and has some other fun tea latte offerings, like the Cape Town Fog and Oxford Haze). They also tend to have a (un?)healthy selection of Empire Donuts. Mmmm. 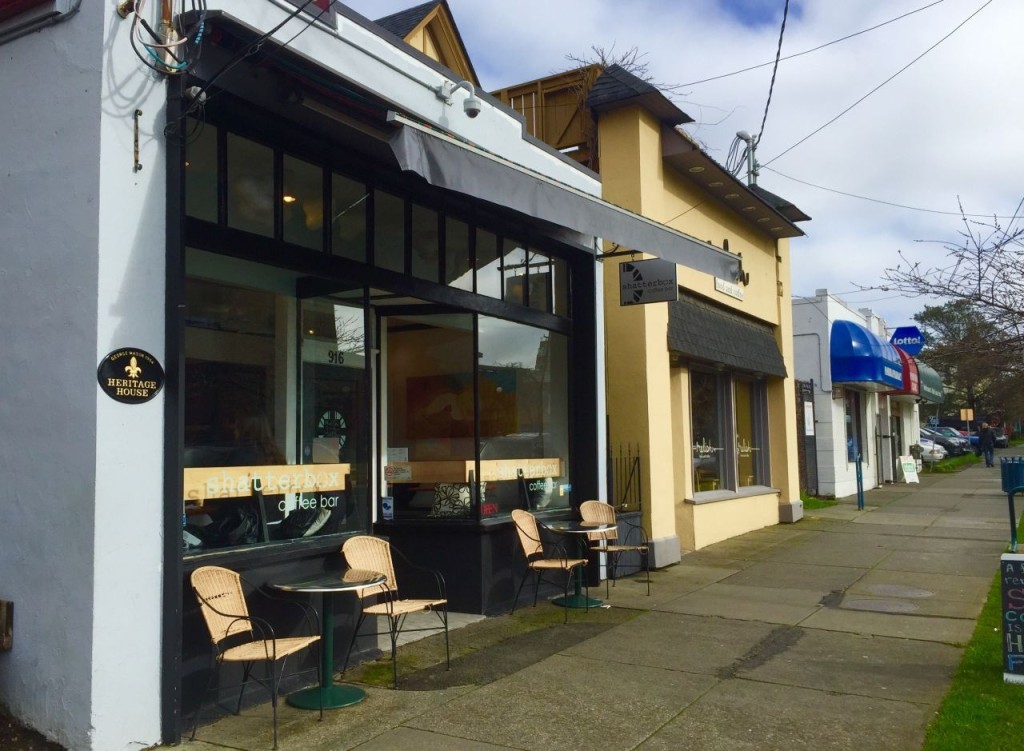 Right next door to Shatterbox is Relish Food & Coffee, which is hands down one of Victoria’s best lunch spots (it also does a stellar breakfast). Its Crispy Smoked Chicken was named EAT Magazine’s dish of the year a couple years back. The menu changes daily, so you’ll have a good excuse to keep going back. Word to the wise: they’re closed Monday and Tuesday.

P.S. A quick caveat: some people might argue that a couple of my favourite North Park finds are technically in Fernwood because they fall on the east side of Cook St., but I’d argue they’re culturally more a part of North Park (yes, I just made a cultural distinction between North Park and Fernwood. Ahem.) Any which way, they’re certainly a part of North Park Village.

P.P.S. I know there are lots of really amazing places that didn’t make this list. Tell us what we missed (and why you love them) in the comments below!