“Looks like we’re the only ones here,” Drea Gibson says, switching off the engine of her 1994 Mitsubishi Delica turbo-diesel Spacegear L400. As the dogs clamour for the doors, we three passengers grab our daypacks and tumble out behind. We’re standing in a rough cul-de-sac carved off the side of a logging road a half-hour’s drive (or so) from Port Renfrew. Safe to say, even if we had managed to find our way here without our guide, our car likely would not have made it out in one piece.

We leave the van and turn up the road toward the thickening woods. Within a few steps, the trailhead verges off to the right, barely visible beside a rickety sign on which Red Creek Fir is scrawled in flaking red paint. We veer into the dense undergrowth and follow the steady incline, pushing through lush mounds of ferns before the trail widens into a more proper path. 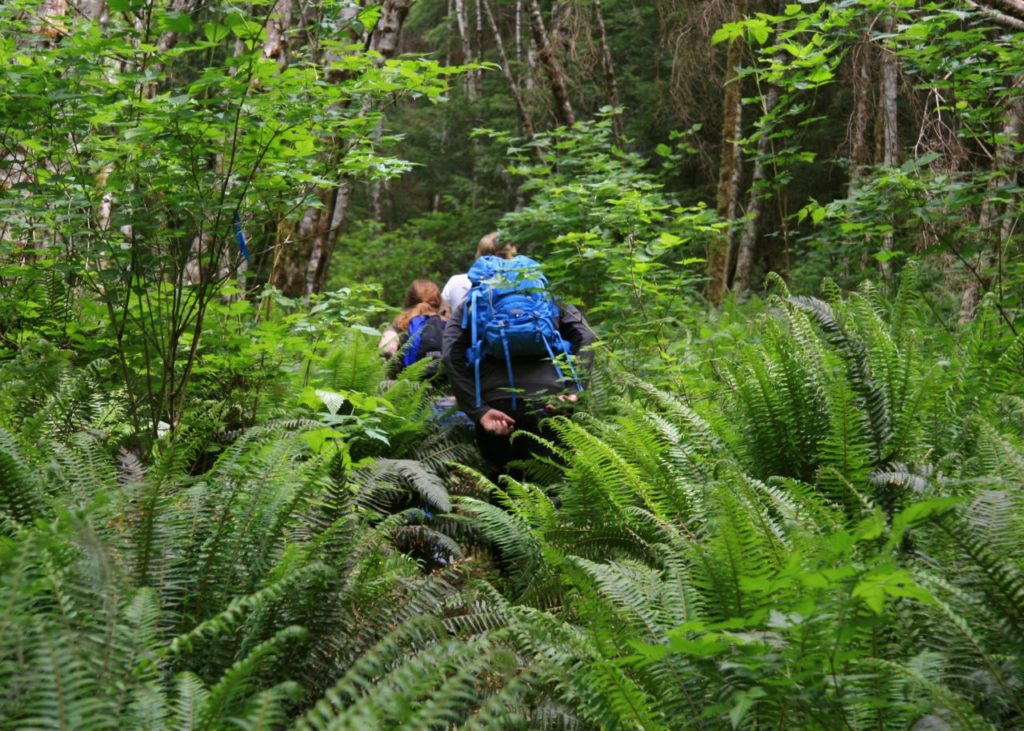 En route to the Red Creek Fir, with guide Drea Gibson in the lead. Photo by Julia Kilpatrick.

We’re barely winded by the time the trail stops abruptly at the base of the monolithic tree. The legendary Red Creek Fir looms an easy 25 storeys overhead, supported by a foundation nearly 14 feet across. It’s considered the world’s largest Douglas Fir, yet it stands as unobtrusive as a tree of its size could — its significance marked only by a weathered, hand-carved sign identifying it as a “proposed B.C. heritage tree.”

Standing in the shadow of the ancient canopy brings back a feeling I’ve often found in quiet moments high in the alpine or at the edge of the ocean: the certainty that every single worry, fear or ambition I hold is irrelevant in the scale of time that nature operates on.

It’s a feeling that’s becoming familiar here in the forests of the San Juan valley. Over the course of the day, Drea introduces us to the gnarled cedars of Avatar Grove and a stately Sitka spruce — trees she has come to love in the years since she first started leading trips into the woods. 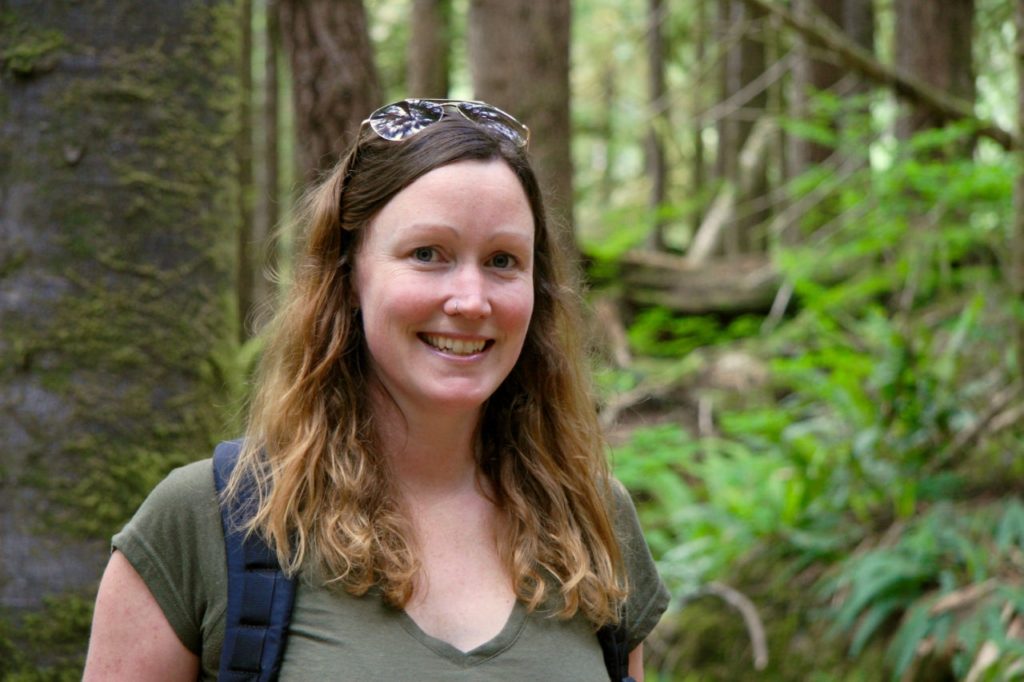 “It really started with wanting to help people get out of the rat race,” she says when I ask her what inspired her business. She was about to quit her job at a backpackers’ hostel in Victoria when she tossed out a compromise: she was done with the graveyard shift, but willing to take tourists on guided daytrips if there was enough interest. That proposal led to a regular gig, and earned her the title “Daytrip” Drea.

The name stuck — and so did the business concept. By 2008, Drea enrolled in a business course and the year later, she went out on her own.

“It just all made sense,” she says, looking back. She was frequently taking out friends and acquaintances in her free time, doing hikes and camping trips. “Why not take people out who might not do it on their own?”

It took about four years to build the business to the point where that’s all she was doing in the summers, and Drea still supplements her income in the off-season by working at a lodge in Port Renfrew and scouting film locations around Vancouver Island. Now clients come to her from as far afield as Europe. 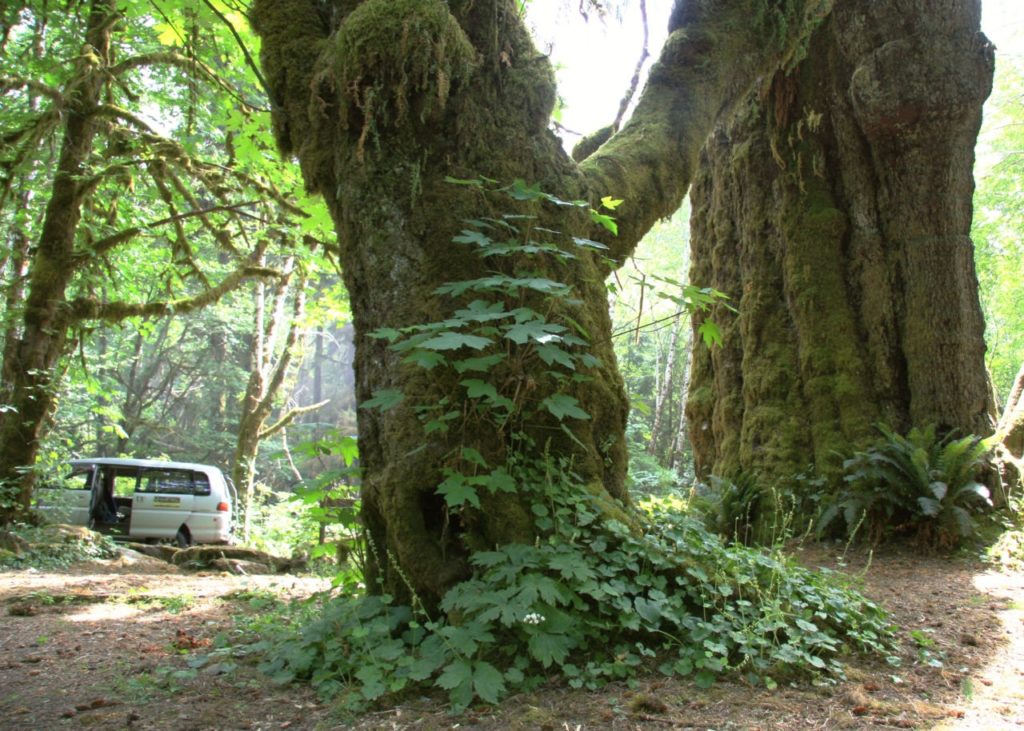 Drea Gibson’s Mitsubishi Delica van is dwarfed by the San Juan spruce, one of the more readily accessible old-growth giants of the San Juan valley.

The business isn’t the only thing that’s been changing lately.

“Pretty sure I’m the only wilderness guide with a breast pump in my lunch bag,” she says wryly, adding that the arrival of her son this spring did require some adjustments to her lifestyle as a guide. But becoming a mother, she says, also brought a new dimension to her love of the big trees and the lands that sustain them. “I definitely want my boy to grow up and see all this.”

– On May 31, 2016, the B.C. Chamber of Commerce passed a resolution calling for the protection of old-growth forests where they present an economic opportunity for communities like Port Renfrew, where big-tree tourism has become a significant draw. Learn more here.

– Heading out on your own? The Ancient Forest Alliance identifies the top big-tree destinations in and around Port Renfrew. Don’t forget to pack your Vancouver Island Backroads Mapbook in case you take a wrong turn.