Lunch has a special place in my heart — because let’s face it: it’s the underdog of meals.

When is the last time you saw people lining up down the block for lunch? Or making reservations weeks in advance? Yea, lunch doesn’t get that much love.

But here’s the thing: you can score some sweet deals at great restaurants if you just show up mid-day.

Take this lunch I just had at The Next Modern Japanese Cuisine in Cook Street Village today (yea, check out that picture up top. I mangled that).

Since opening less than a year ago, The Next has already earned a rating of 16th place out of nearly 1,000 restaurants in Victoria on TripAdvisor, making it the top-rated sushi restaurant in Victoria. It’s not surprising given that the chef and owner is Takashi Hiraoka, formally the head sushi chef at the Brentwood Inn, known for its fab sushi.

The Next has become so popular that it recently stopped taking reservations, seating now on a first-come, first-serve basis (at least I take that as an annoying sign of popularity?).

Any which way, I waltzed in there on a Sunday for lunch and had the place to myself.

Feeling a little ravenous after a 90-minute yoga class over at Hemma, I got ambitious and ordered the Kaiseki Bento (hoping against hope that my friend would arrive in time to help a lady out).

So let’s break down why this lunch special is so awesome. First off, at $18, it’s a wicked deal and will easily feed two people. Because I’m a little obsessive, I did a little menu analysis and calculated that if I’d ordered those items a la carte, it would have cost me close to $45. Yea, 45 bones.

Secondly, the food is actually awesome. You know how sometimes you order a $12 bento box thingy and know it’s gonna be sub-par, but  it’s cheap and easy, so you order it any way? This is not like that. This is getting that pricey sushi you don’t normally spring for — at a bargain price. (See, this is why I love lunch so much.)

Now, for the actual food.

The miso soup at The Next is standout — in part because it has legit enoki mushrooms floating around in it, which gives you the distinct impression it involved more work than opening a can.

The sashimi included hamachi so delicious it made me finally look up what the hell hamachi is (fun fact: sometimes it’s called yellowtail tuna, but it’s not actually tuna). Oh, and there was albacore tuna and ahi tuna sashimi, too. Yummm.

The real showstopper though was the marinated and grilled salmon, which was like a main dish on its own. In fact, on the menu, it was creatively referred to as “main dish.” Seriously, look at it. It was ridiculous. 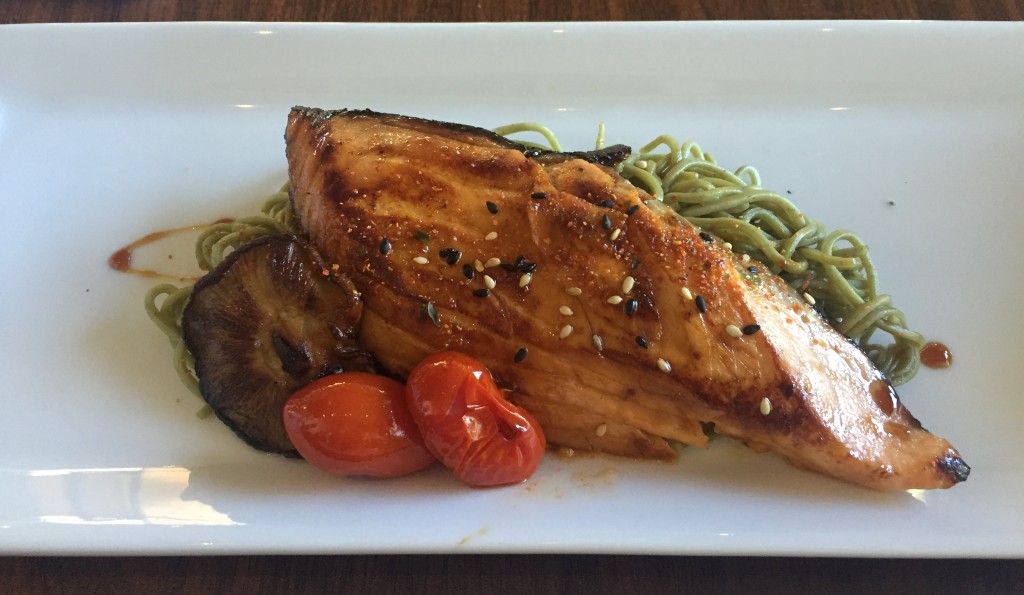 Marinated and grilled salmon with soba noodles at The Next Modern Japanese Cuisine in Victoria.

See what I mean? If you have a hankering for a good deal, get thee down to The Next for the lunch special pronto. But make sure you take a buddy with you.