If there’s anything more quintessentially Victoria than two 20-something surfers selling boutique clothing and surf boards out of a solar-powered shop on a lot once used as a dumpster staging area, I’ve yet to see it.

That’s the scene I stumbled upon on Saturday when I parked on Discovery Street to scoot into Capital Iron — a Victoria institution worthy on the north edge of downtown of its own post .

Across the street was Anian, a retail shop, surf board workshop and music venue all in one. Co-owner Paul Long was perched on a wood bench wearing a Cowichan vest as I walked up.

My first question is: “What does Anian mean?” Paul tells me it was the original name given to the Strait of Juan de Fuca when explorers were convinced it was part of the Northwest Passage. Iiiinteresting.

I’d actually heard of Anian during Rifflandia, when it becomes a venue for 240 people and — along with Phillips Brewery and Capital Iron — creates a block party atmosphere in Victoria’s normally industrial north-end. But somehow I hadn’t actually laid eyes on Anian until this weekend.

Paul shows me the 14-ounze Melton wool dress shirt he’s wearing. Wind- and water-resistant, the cozy shirt is one of Anian’s marquis items this season. (Psssst … it’s a real beaut and would make a pretty spiffy Christmas present for those outdoorsy types on your list.) 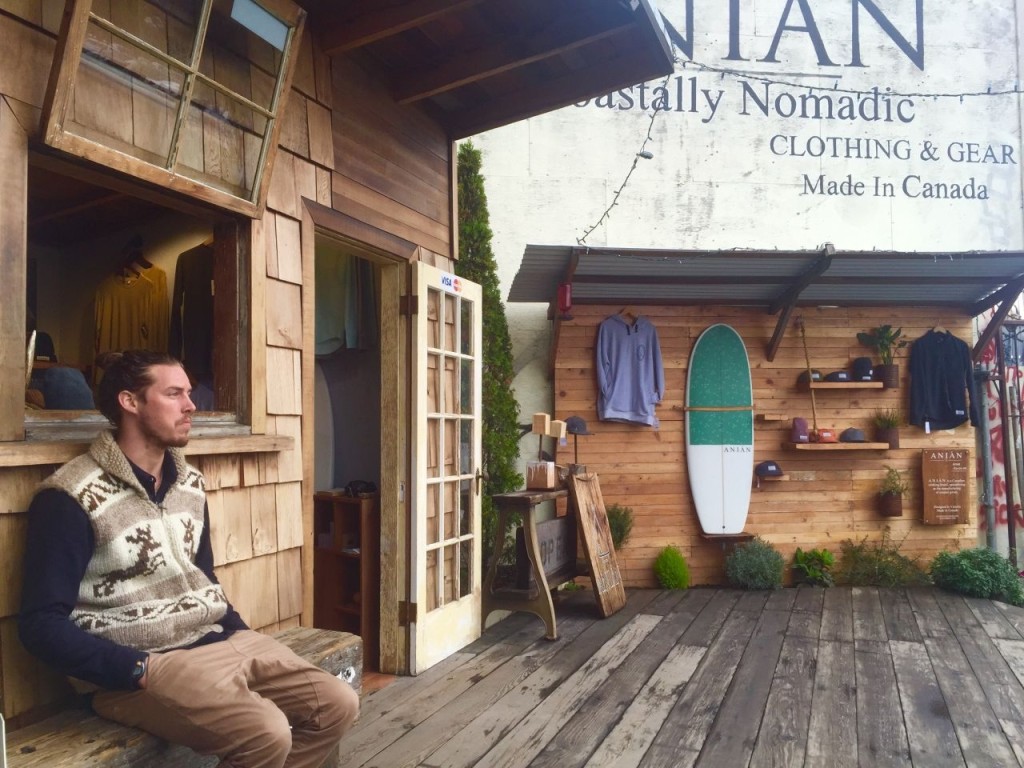 All of Anian’s “coastally nomadic” clothing and gear is made right here on the West Coast in Vancouver and Victoria.

“People vote with their money,” Paul says as I lay eyes on a super soft black V-neck made of a bamboo-cotton-spandex mix. “I wish more people realized that.”

They even have a video (made by Victoria independent filmmaker Jayce Hawkins) showing how that magic happens. Suh-weet.

As if that wasn’t all cool enough, it turns out that Anian is Canada’s first 100 per cent off-the-grid store. When Paul and Nick decided to open the store two years ago, they discovered it would cost about $5,500 to get city electrical service to the lot they’d chosen — so they invested in solar panels instead. Next, they crowd-funded nearly $13,000 on Indiegogo to scale up.

It doesn’t stop there. The workshop and retail space are made almost entirely of reclaimed material — using everything from salvaged wood from a blimp hanger to a greenhouse door from the surrounding neighbourhood. Pretty cool, huh?

Local, sustainable, outdoorsy and rad — doesn’t get any more Victoria than that.